Humans were made by God to show a special tenderness toward all sentient beings and with the moral intuition that injustices against the innocent are wrong, whether the victim is human or not. Pigs, like all animals, are loved by their Creator. Today, pigs who are raised and killed for food endure hell—but you can help them!

The following are our top 10 reasons to keep pork off your fork and put delicious Babe-free alternatives on your shopping list instead: 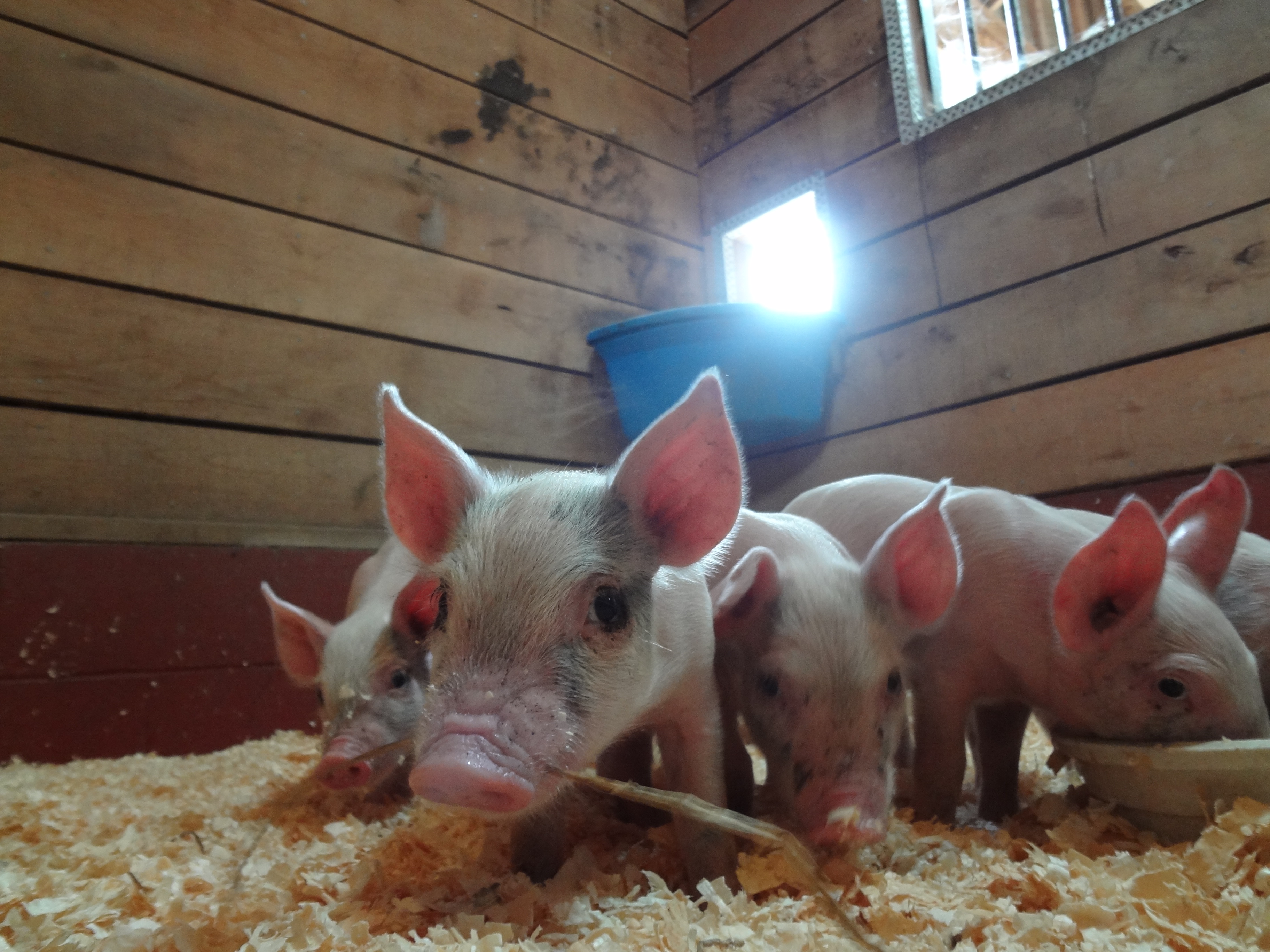 The Books of Wisdom repeatedly remind us that the whole of creation is God’s, that all of creation worships Him, and that His covenant is with every creature:

2. Your Body Is a Temple 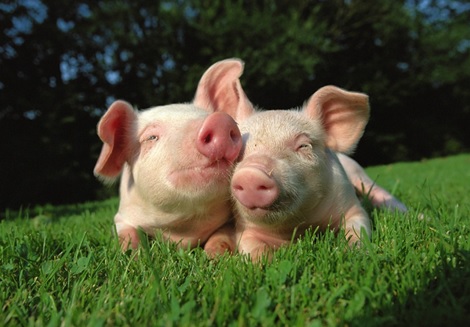 One way that we can honor our bodies is by eating foods that are healthy. Consuming pork products, which are loaded with artery-clogging cholesterol and saturated fat, increases your chances of developing illnesses such as heart disease, diabetes, arthritis, osteoporosis, Alzheimer’s, and asthma. Research has shown that vegetarians are 50 percent less likely to develop heart disease and 40 percent less likely to develop cancer than meat-eaters.

3. Pigs Have Feelings, Too 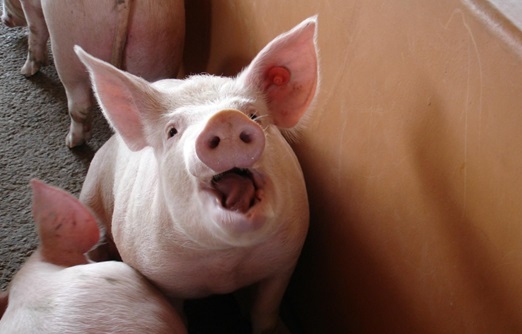 Ninety-seven percent of pigs in the United States today are raised on factory farms, where they will never run across sprawling pastures, bask in the sun, breathe fresh air, or do anything else that comes naturally to them. Crowded into warehouses with nothing to do and nowhere to go, they are kept on a steady diet of drugs to keep them alive and make them grow faster, but the drugs cause many of the animals to become crippled under their own bulk/ 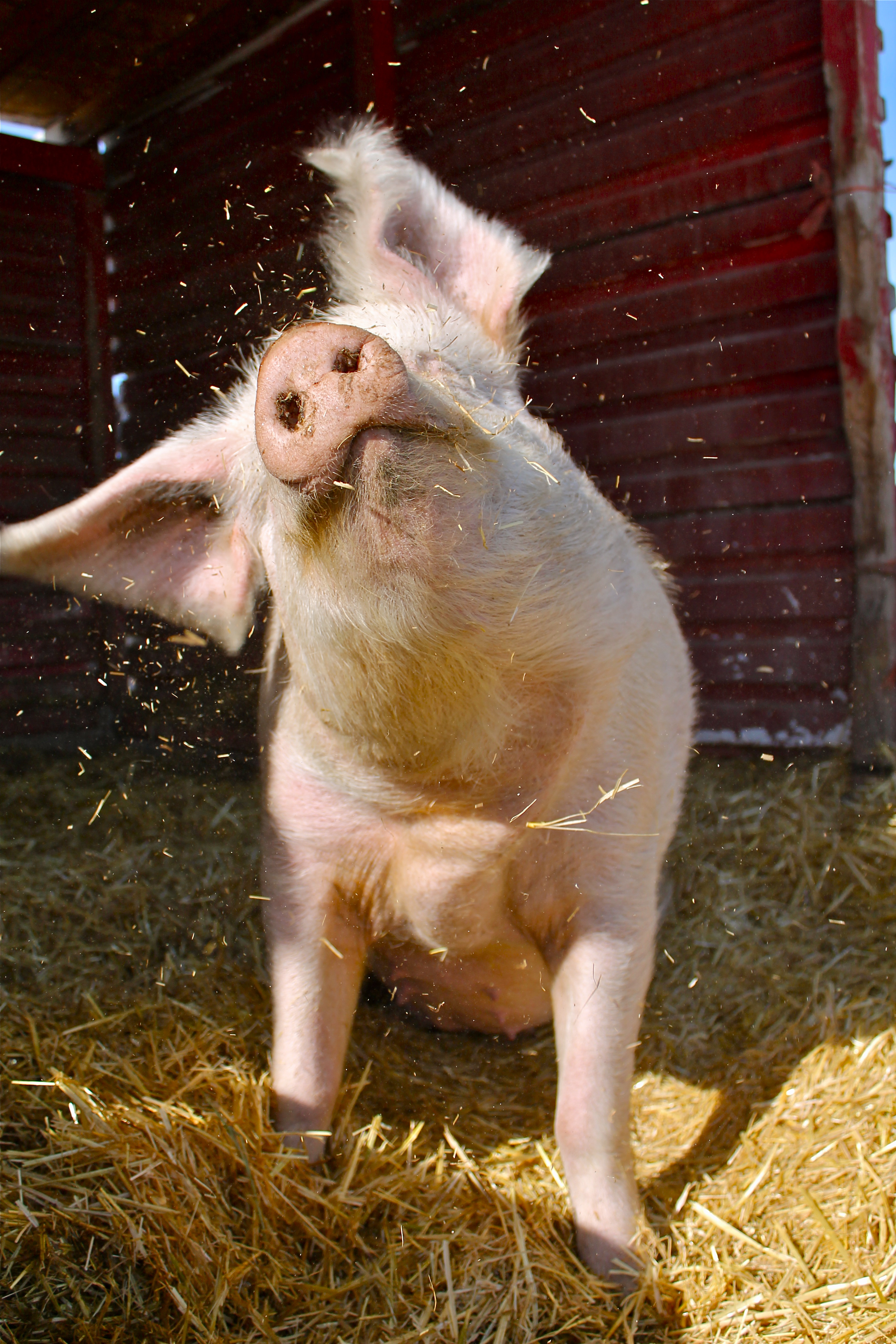 Think that you can outplay a pig on your Playstation? You may be surprised. According to research, pigs are much smarter than dogs, and they even do better at video games than some primates. In fact, pigs are extremely clever animals who form complex social networks and have excellent memories. Eating a pig is like eating your dog. 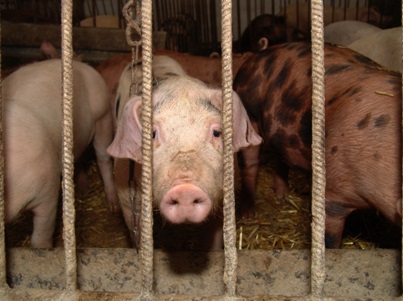 The meat industry is hell for pigs and their babies. Mother pigs spend most of their lives in tiny “gestation” crates, which are so small that the animals are unable to turn around or even lie down comfortably. They are repeatedly impregnated until they are slaughtered. Piglets, who are taken away from their distraught mothers after just a few weeks, have their tails chopped off, their teeth are clipped off with pliers, and the males are castrated—all without painkillers.

6. The Manure Is Blowing in the Wind … 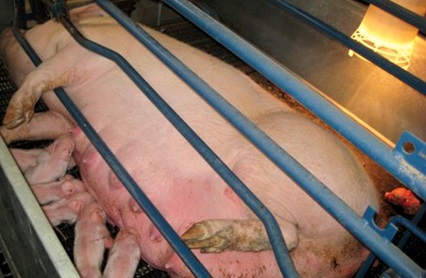 A pig farm with 5,000 animals produces as much fecal waste as a city of 50,000 people. In 1995, 25 million gallons of putrid hog urine and feces spilled into a North Carolina river, immediately killing between 10 and 14 million fish. To get around water pollution limits, factory farms will frequently take the tons of urine and feces that are stored in cesspools and turn them into liquid waste that they spray into the air. This manure-filled mist is carried away by the wind and inhaled by the people who live nearby. 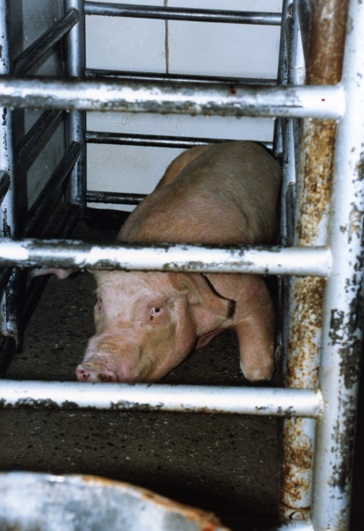 Extremely crowded conditions, poor ventilation, and filth in factory farms cause such rampant disease in pigs that 70 percent of them have pneumonia by the time they’re sent to the slaughterhouse. In order to keep pigs alive in conditions that would otherwise kill them and to promote unnaturally fast growth, the industry keeps pigs on a steady diet of the antibiotics that we depend on to treat human illnesses. This overuse of antibiotics has led to the development of “superbacteria,” or antibiotic-resistant bacterial strains. The ham, bacon, and sausage that you’re eating may make the drugs that your doctor prescribes the next time you get sick completely ineffective. 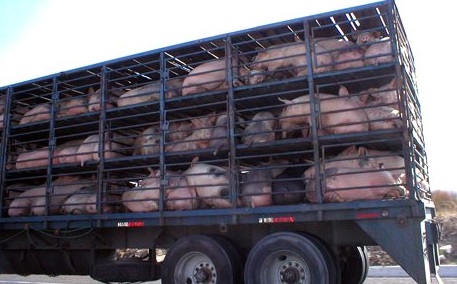 More than 170,000 pigs die in transport each year, and more than 420,000 are crippled by the time they arrive at the slaughterhouse. Transport trucks, which carry pigs hundreds of miles through all weather extremes with no food or water, regularly flip over, throwing injured and dying animals onto the road. These terrified and injured animals are rarely offered veterinary care, and most languish in pain for hours. Some even bleed to death on the side of the road. After an accident in April 2005, Smithfield spokesperson Jerry Hostetter told one reporter, “I hate to admit it, but it happens all the time.

9. Killing Them Without Kindness 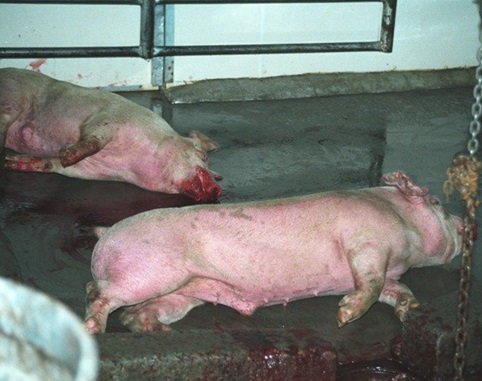 A typical slaughterhouse kills up to 1,100 pigs every hour, which makes it impossible for them to be given humane, painless deaths. The U.S. Department of Agriculture documented 14 humane slaughter violations at one processing plant, where inspectors found hogs who “were walking and squealing after being stunned [with a stun gun] as many as four times.” Because of improper stunning methods and extremely fast line speeds, many pigs are still alive when they are dumped into scalding-hot hair-removal tanks—they literally drown in scalding-hot water.

10. Ditch the Bacon and Get Fakin’

Save pigs from hell and yourself from bad health by feasting on faux-pork products instead. Stuff a sandwich full of Yves-brand veggie-ham slices, or throw some Lightlife Smart Bacon into a sizzling skillet—the freezer and health-food sections of your local grocery or health food stores are packed full of these and other tasty substitutes.