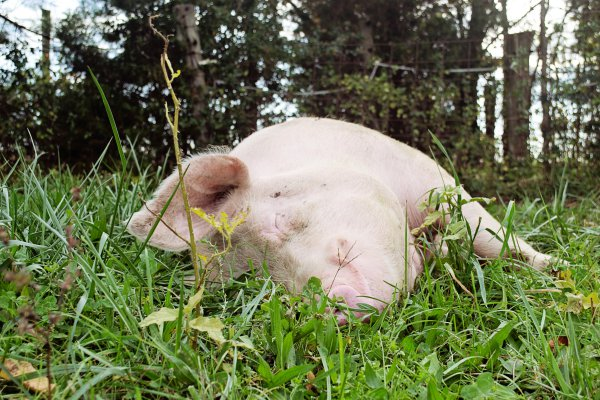 In university agricultural programs, students are often required to raise animals and then send them to slaughter. But one student at an East Coast university had a change of heart during his swine-production class. The instructor had brought in eight pregnant sows from a farm, immobilized in gestation crates, and told the students that in order to avoid getting “attached,” they should name the animals not as individuals but according to their eventual fate. So the sows were given names such as “Baconator,” “BLTina,” and “Sloppy Joanne.” After the sows gave birth, the students were to auction off the mothers and their piglets for slaughter. The point in doing this was to teach the students about “state-of-the-art” pig farming.

But as one student got to know the pigs, he learned something else: how friendly, intelligent, and loyal they are. He couldn’t sentence them to death. So he contacted Helga Tacreiter, who operates The Cow Sanctuary in New Jersey. According to Helga, the student e-mailed her saying, “I met pigs for the first time, and they’re wonderful, intelligent creatures, and they’ve had a life of total misery. And I’d like to save them.”

Helga has been a PETA friend for decades and has taken in many of our rescued animals. And true to form, she agreed to take the pigs. Then PETA patron Sam Simon stepped up to the plate and offered to donate the money that was needed to save the pigs. It looked like the animals were home free. But then there was a problem that no one could have predicted.

Days before the pigs were scheduled to go to auction, the student found out that the school had inexplicably sold the pigs early and they were now on a truck bound for the slaughterhouse. He called Helga, and working together, they got in touch with the truck driver and persuaded him to turn the truck around—for a fee, of course. The student even paid a portion of the fee out of his own pocket. The student, his friend, Helga, and the driver unloaded the pigs at night with flashlights. A few minutes after the exhausted, frightened pigs arrived at The Cow Sanctuary, they curled up in a pile and slept for 24 hours straight. One of the pigs, renamed Trixie, was too ill to be saved and died a few days later. Helga removed the factory farm tag from her ear and buried her at the sanctuary.

I was lucky enough to get to spend a day with the rest of the pigs, who are flourishing in their new home. They love to explore the grounds and root around in the straw. They had never seen fresh fruit or vegetables before and weren’t sure what to do with them at first. Nor had they ever seen a bucket or tub of water (they previously only had access to tiny water bottles similar to those given to hamsters or gerbils). At first, the pigs tried to bite the water, and then they tried to climb into the troughs. With some coaching, they got the hang of it, and now they love to play in the water as it comes out of the hose and tote the hoses around in their mouths. They also run to greet Helga every time she goes into the field. And despite their size, they were extraordinarily patient and gentle with my young son, who loved helping Helga give them food and water.

Among the last traces of the pigs’ former lives are the tags punched through their ears. Many of the pigs won’t let Helga remove the tags, likely because their ears are so infected and swollen from having the tags put on and they’re painful to the touch. Helga is treating their ears with antibiotics and looking forward to the day when all the pigs break their last tie to the meat industry.

What You Can Do

The Cow Sanctuary relies on the generosity of caring animal advocates for its important work. Please make a donation to PETA’s Investigations & Rescue Fund to help care for pigs and other animals rescued from cruelty and neglect. Your support today will help provide formerly abused animals with the peaceful retirement they deserve.